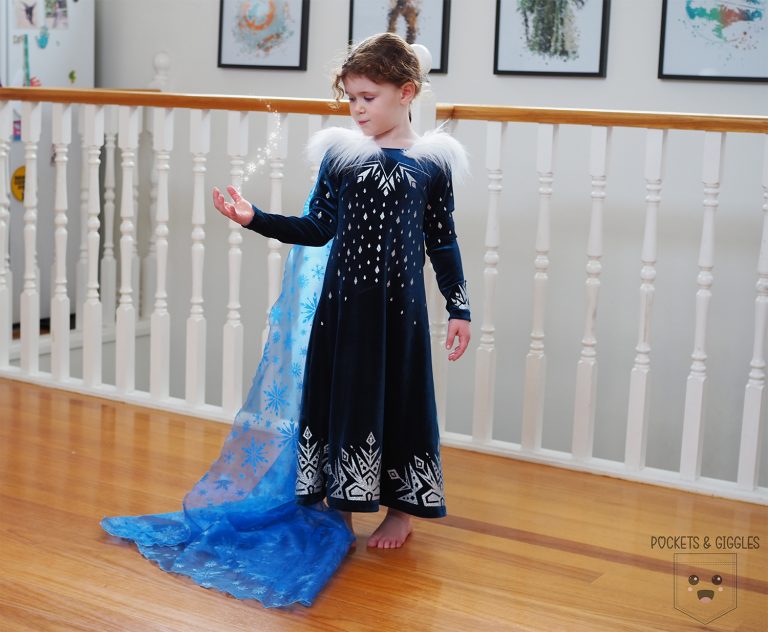 My five year old daughter has been Elsa-obsessed since she was two. There are a lot of Elsa dresses in her wardrobe. This is my favourite yet – a simple sew, with bodice and hem details that really make it magic. 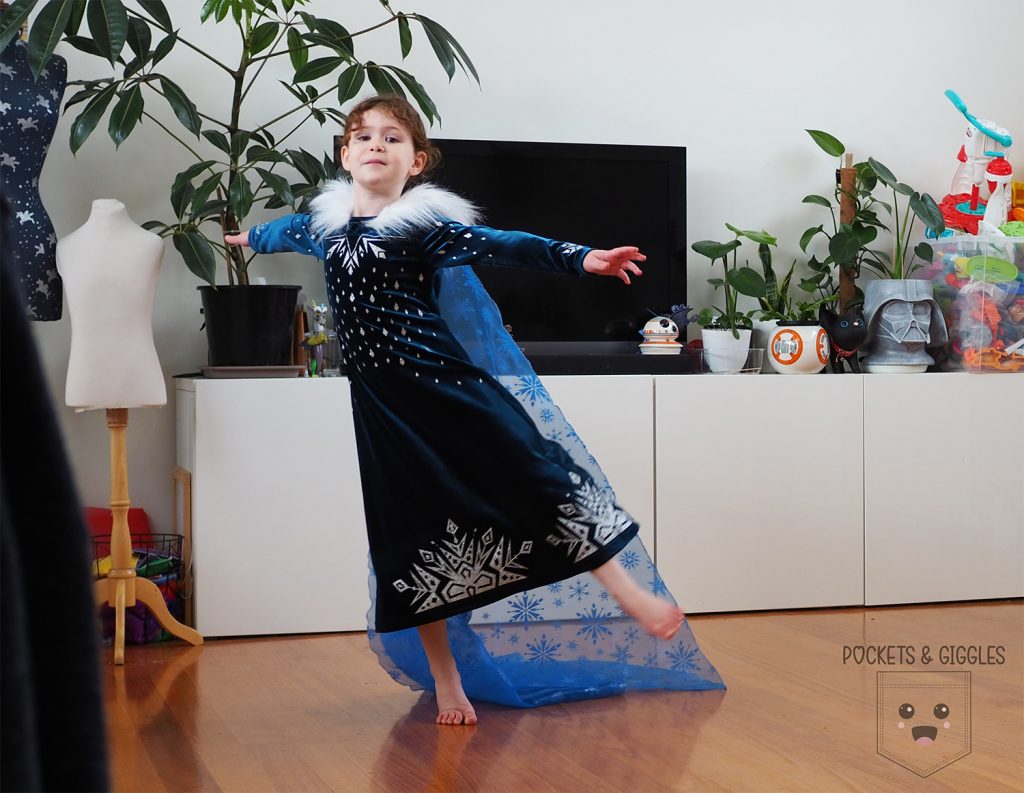 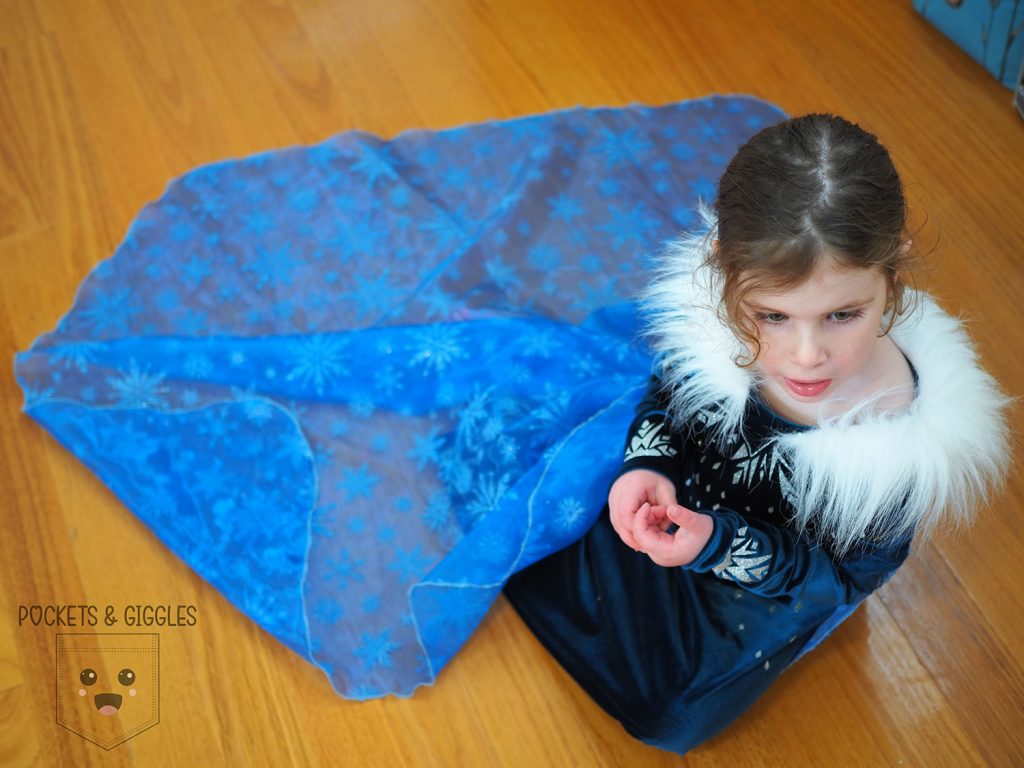 Olaf’s Frozen Adventure is a vastly underestimated Disney short from 2017. Although it’s only 21 minutes long, and mostly about Olaf – the best character in the Frozen franchise – Elsa swishes through the whole thing in a floor-length deep blue snowflakey becaped number.

My 5 year old has been asking me to make her this dress since, well… 2017, and like the good mother I am, it only took me two whole years before I finished it.

I’m part of a BFF sewing group with three other Australian sewists, all of whom are far more knowledgeable about sewing than I am. We complete challenges together every month (okay, most months) (…okay, some months), and the challenge for April 2019 was velvet. And so, the time was nigh to make Elsa’s Frozen Adventure dress. 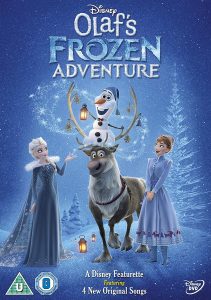 The Margot dress by Violette Field Threads is probably the simplest dress pattern I’ve ever made. I’m a slow sewist, and yet I think I could knock one of these out in an hour or so.

Most dresses in this shape that Elsa wears here have princess seams (two long seams run top to bottom down the front of the dress). I really didn’t want that because I knew I was going to need to put heat transfer vinyl on the bodice, and I didn’t want too many seams to get in the way. Also, I was making this dress for a 5 year old, who doesn’t yet have a body shape that needs that level of tailoring.

Margot is perfect because it’s just a mirrored, flat front and back. It’s designed for knits, and the stretch in the fabric helps to give the necessary shape.

Margot only needed a couple of slight modifications.

After I was happy with my modifications, I cut the lining, basted it, and tried it on my daughter for fit. (It was perfect!)

You can see the difference between the two Margots by comparing the printed pattern piece and my tear and toile version:

Next, I cut out my fabric. Here’s where I made my first mistake.

It turns out (and this will no doubt be incredibly obvious to more experienced sewists) that velvet has definite nap. I didn’t realise this because I’ve never sewn with velvet before – and also probably because the lighting wasn’t great when I was cutting out my fabric. I generally only sew when my kids are in bed, which means 8pm to 11pm. Sooo, in order to conserve fabric, I cut the dress front and the dress back in different directions against the nap.

I didn’t realise my mistake until I’d already put the dress together. However, I wasn’t going to remake it! It’s not too noticeable because there is a cape hiding the back.  You can only really see my mistake in bright sunlight. And my 5 year old, despite being very perceptive to the sound of a chocolate bar being opened in the next room, has never once noticed.

Margot requires the side seams for the lining and the main dresses to be sewn together. I didn’t do this, because my overlocker (an Elna Elina Pro) did not like chewing through two layers of cotton lycra and two layers of stretch velvet at the same time. So, I just overlocked the lining and main separately, figuring that the weight of the fabric would keep it in place. So far, I’ve seen no problems with the lining twisting beneath the dress, but I could always pop in a couple of stitches by hand along that hem if I need to.

I used my Juki 1500 coverstitch to do the hems. I’ve used my coverstitich on two projects now, and I really feel like I’ve gotten the hang of it!

I don’t have the time or interest to use applique for the eleventy billion design elements all over this dress. I could have used crystals, but that would have cost quite a lot.

Instead, I used my Cricut to cut silver glitter heat transfer vinyl (HTV).

The details at the collar, hem and sleeves are all from joy2sew’s Etsy store. I actually found Joy’s store by searching for snowflake images, and I discovered instead that she has stencils available for a bunch of Frozen costumes. As Joy didn’t yet have an Olaf’s Frozen Adventure stencil in her store, I messaged her to ask her if she was planning on doing one… and a few weeks later she had! I love it that crafters are so responsive to other people who really admire their work.

I had to play around with the files a bit before cutting (for example, to give them a transparent background). But even with my minimal image manipulation skills, I managed to get them to be ready to cut. The only other modification I made was to thicken the inverted flat W at the collar – the original is true to the animation and quite thin, and I was worried that the HTV would snap due to the stretch of the velvet if it wasn’t substantial enough.

I also cut extra smaller diamond details underneath the collar, across the chest and on the top sleeves. I just moved them around until they were where I wanted them to be in the Cricut Design Space software.

Velvet is pretty sensitive to heat, but I just used a mini heat press on its lowest heat, and kept it moving across the fabric fairly quickly.

The final challenge was to self-draft the collar and cape.

I created a collar piece by tracing the finished collar area. For the fur, I cut the collar into three sections: one for each side of the bodice, and one for the back. This was so that I could cut it so that the direction of the fur would run the way I needed it to go (straight down at the back, and also straight down at the front). I had purchased some really thick, long fur in order to match the collar from the animation. However, I knew my daughter would refuse to wear it if the fur tickled her skin.

I used some snips to shave down the seam allowance on the fur, which made it easier for me to sew the pieces together. My sewing machine has a float function that lets me slightly lift the foot when sewing thick fabric – but I was pleasantly surprised that I didn’t need to use it on the fur.

I cut out a mirrored piece of white cotton broadcloth, set right sides of the two together, and sewed – leaving a 10cm gap to turn through. After hand stitching the collar fully closed, I hand stitched the collar to the dress.

This was probably my second mistake. It would have been much easier to simply sandwich the collar within the bodice when I was sewing the neckline, then turn it out.

But I didn’t think of that.

I next sketched out the cape. The measurements were purely based on the size of snowflake chiffon fabric I had – a clearance remnant that I bought for $2, because I’m alllllll about luxury.

I imitated the shape of Elsa’s cape, keeping the top width the same width as the finished dress shoulders (28cm including a generous seam allowance), the widest piece about 20cm lower than the finished dress hem, and the centre point of the hem the full length of my remnant.

Chiffon is incredibly light fabric, and I decided to finish it with a rolled hem. My overlocker does a two-thread and a three-thread rolled hem.

Since I didn’t have any thread that actually matched the cape well, I just went with grey, as I thought it would kind of pick up the silver in the dress. I chose a two-thread rolled hem so that there would be less of the grey. I think it looks okay, colour-wise.

I wasn’t too happy with the way my overlocker handled the chiffon, though. It’s fine on the plain blue chiffon, but where it cut through the snowflake print, the knife cuts noticeably wider, as if it has kind of slipped or skidded on the fabric.

It’s not noticeable unless you look really closely, but I guess in retrospect I should have gone with the three thread rolled hem. Perhaps the weight and tension of the extra thread would have minimised this effect. Then again, maybe not? Either way, I’m not finishing those edges again over such a minor issue.

Once hemmed, I folded the top of the cape twice over, then sewed across the top. The cape is secured to the underside of the collar with hooks and eyes, so that it’s removable.

And that’s it! One Elsa dress for two very happy girls. While I did intend it to be for my 5 year old, my 3 year old wasn’t happy to sit on the sidelines for long. 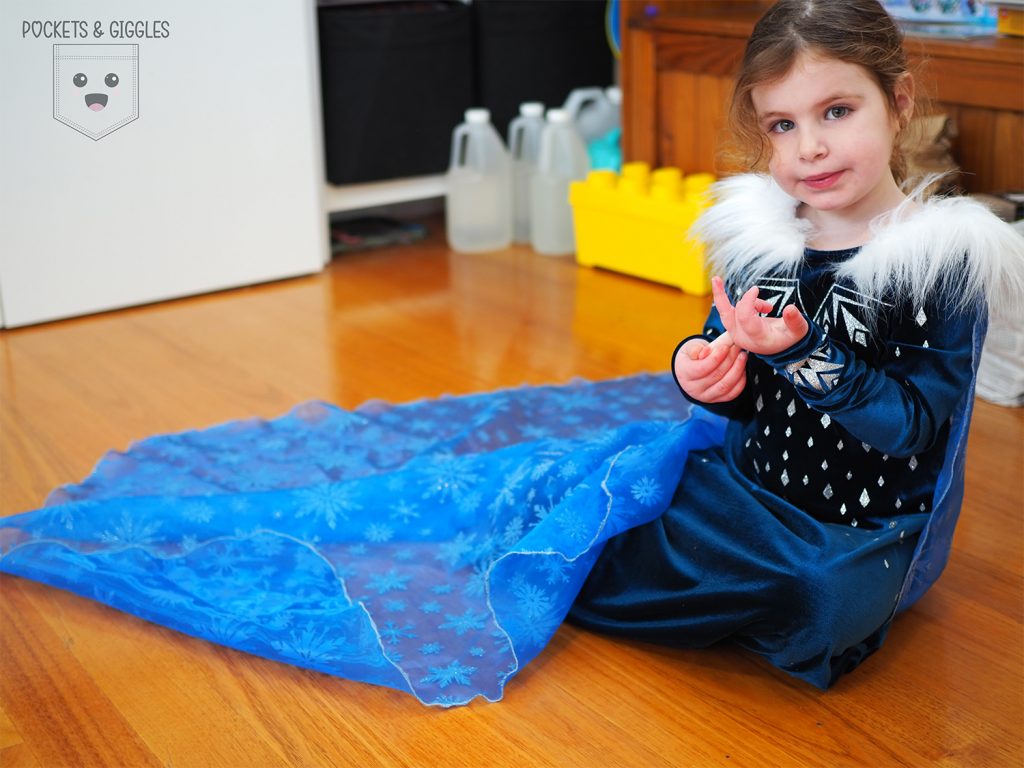 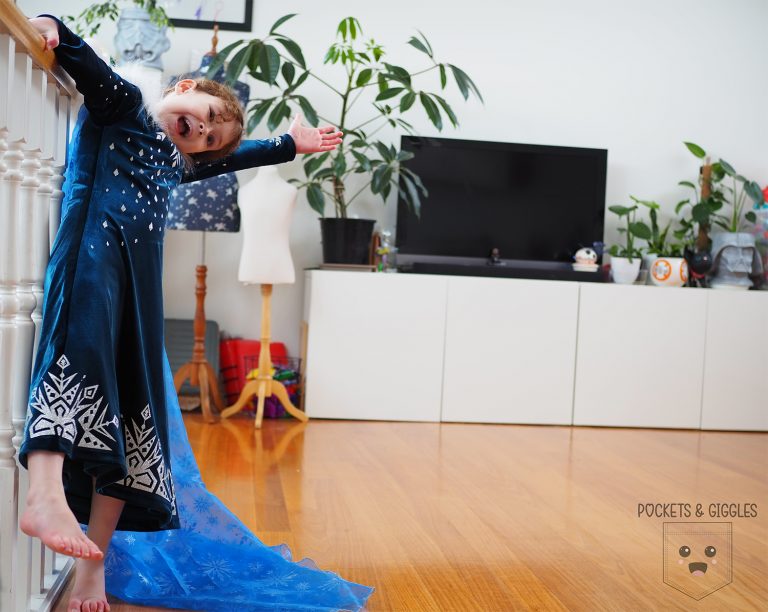 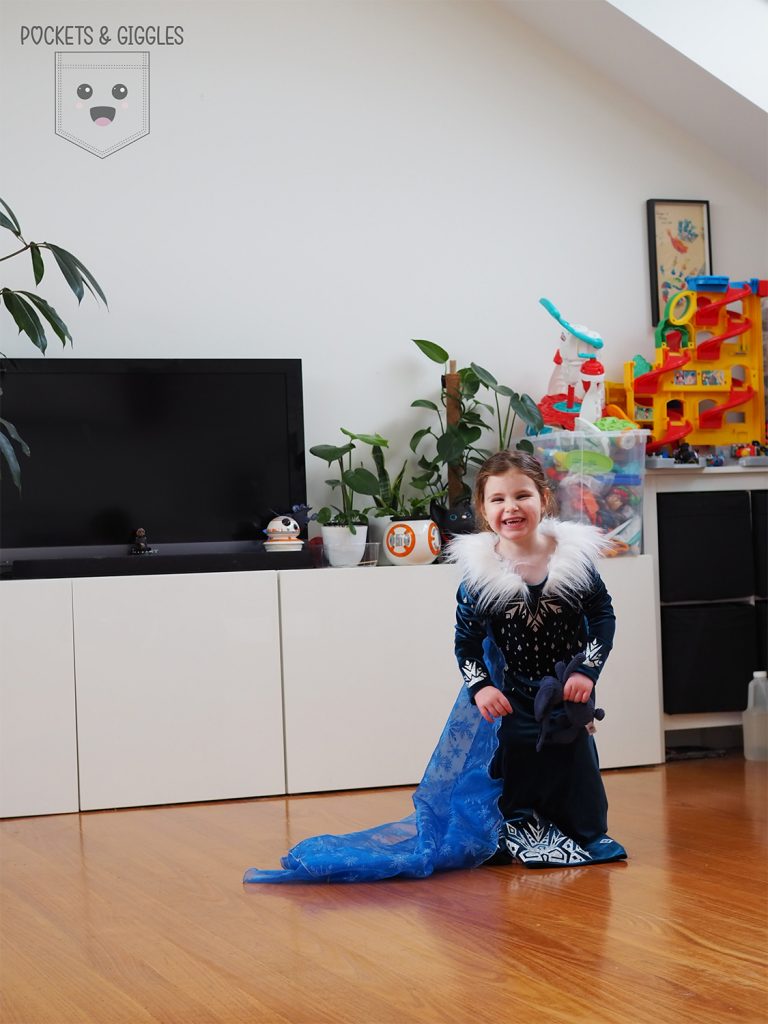