About a year ago, I bought a Buzz Lightyear panel in a fabric destash sale. I recently started to panic that maaaaybe my daughter would stop being interested in Buzz before I got around to making her something with it. 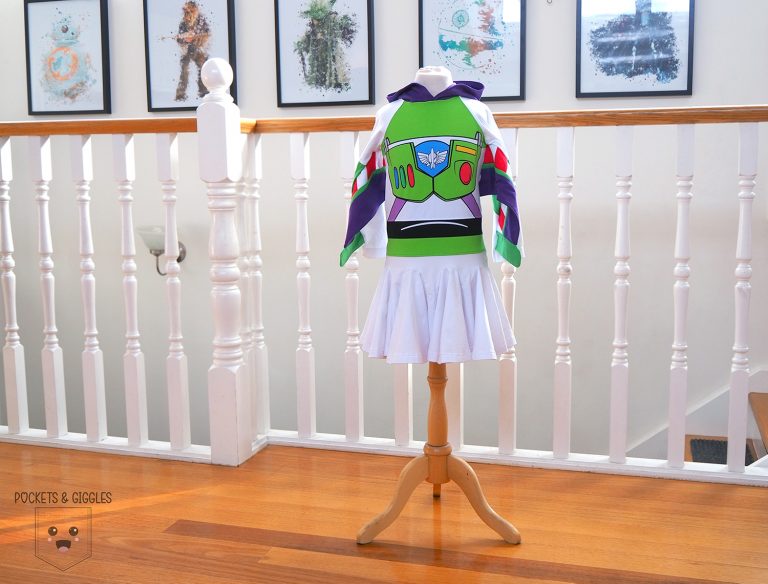 The MegaMax pattern is a raglan style t-shirt pattern with lots of add on options (animal wings, superhero capes, etc) – perfect for this project. There is a Space Ranger wings option, and while I used the pattern’s pieces (actually, I cut the pieces apart), I certainly didn’t follow the pattern’s instructions.

Falling with style: making the wings

Instead of appliqueing pieces to each wing, I sliced the pattern into pieces, added seam allowance, cut two mirrored pairs of each piece, cut two mirrored sets of the same pieces in very light interfacing, fused the interfacing on the back of each piece, and then stitched them together. Why on earth I thought this would be quicker and simpler than applique I just don’t know.

I used the lightest possible interfacing that I found in my sewing cupboard. I wanted to be sure that my daughter could bend her arms with no restrictions to her movement. I probably could have found a lighter interfacing at Spotlight, but I’m currently living in a city locked down fairly tightly (thanks, COVID), so for this dress I needed to use only what I have in my sewing stash already.

The woven interfacing I used has only a very slight stretch, which I aligned with the stretch of the sleeve. I specifically chose a woven interfacing so that the small pieces wouldn’t warp or stretch when the dress is washed… and my daughter is three, so I’ll be washing out chalk and Play-doh and sand and all kinds of junk pretty well constantly.

Making the bodice and skirt

I started by making some pretty elementary modifications by slicing the sleeves to add in green communications panels, and elongating the bottom of the t-shirt to a dress length. Then I attached the wings to the sleeves and bodice, which left me with a garment shaped like a very long tube.

Next, I wanted to add a series of rounded rocket-shaped godets into the bottom of the skirt, largely because my daughter generally refuses to wear dresses that aren’t either a) twirly, or b) all the way to the ground.

I drew a series of 2.5 cm wide rounded channels and sliced them out, ready to insert half-circles as godets. I spaced out the channels evenly (four on the front, four on the back), so that after seam allowance, the gap between the godets would be about 2.5 cm as well.

The godets were self-drafted, and involved some fairly simple maths: the diameter of the semi circle is just the perimeter of the channel.

It’s the godets that give the skirt its incredible twirl. After I inserted the godets, the bottom of the skirt was simply one large circle, which I hemmed in about three seconds thanks to my coverstitch machine (man, I love that thing).

Aaaaand that’s it! I have a very happy little girl, and she has worn her Buzz Lightyear dress almost every day since I made it.